Home » Nutrition for the body and soul. » A woman of immense power. Part 1. 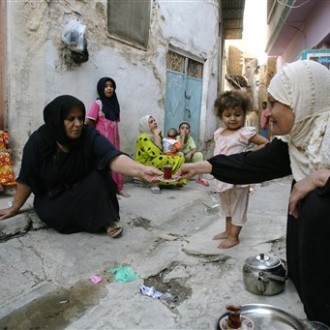 Just imagine  you are a fly, sitting on the wall, listening to this couple conversation in the morning. A husband shots his bullet first:

‘Why my tea is so weak? You know that I like it strong. Two sugars. You can’t even prepare this right. You are so selfish. And lazy! What are you doing all day long at home anyway? My family will not be impressed. Women expected to be perfect housewives in Australia. You will find it hard there.’ Yes, that’s right the traditions of some cultures follow you even as far as Australia!

If you are a Western woman and you think that your life is generally hard and limited, you can’t be further from the truth. Becoming friends with a young woman from Iraq had been an eye opener.  It seems the more she talks to me about their customs, the highers my eyebrows fly.

‘The women do not swim publicly. We step in to the water with her clothes on to cool down.’

‘After your marriage had been arranged and you got engaged, you can’t talk to any other man before the wedding. If you do, the whole family and every relative you have, will cut you off. They will consider you as a harlot.’

‘ A country woman might as well be a brain of Iraq, but it is unlikely she will be able to go to University. She is expected  to give birth to the children and look after the house.’

All women in Iraq are in the same boat regardless their spiritual convictions. The influence of Islam and ancient traditions  are still as strong as death upon all.

After a few conversations with this lady I felt as I came not just  from another country, but another planet.

Can a woman be that suppressed in society? Yes, no doubt. I think people who believe that  Christianity  has not done anything to liberate women, are misinformed. The privileges of women around the world are varied like weather.

But what kind of role and power God entrusted a Christian woman with? That is an excellent question to investigate.

There is a controversial understanding  in Christian circles  about head covering. If you want to know my honest opinion, this is simply a diversion from Satan. He wants to take women’s eyes from the real source of power that lies in her heart, will & mind, not on her head necessarily.

My husband thought that the children brushed their teeth. I told him that they didn’t: ”Touch their toothbrushes and see if they are wet or dry.’ ‘Yes, Sherlock.’ He was impressed. I love watching detective stories or FBI involved thrillers. To have an attitude of a detective towards spiritual reality could be even more fun.

A lot of factors form a person: personality and genes, upbringing and education, in what part of the world the Lord Sovereignty placed her, whether she is  married or not. We  know that. And once you are married, you life changes more than it ever will. The spouses have so much influence on each other it is unreal, Christian even more so.

From the start, the Bible teaches that Adam was created first, he is the head and a woman was created to be his helpmate. It might give you an impression that man is with more power here. Hmmm, may be more authority for sure.  Do you think a Man would be the same man spiritually whether a Woman had incessantly prayed for him or if she didn’t? Whether she was respectful in public to him, but painfully honest in her prayers and  in conversations, when the Lord gave an opportunity? What If she was busy most days, organizing the market, teaching her children, travelling here and there? I know, as a fact, that the more I take on, the less I have time to pray for my husband. So the best advise I could give to a Woman is to be completely committed to her husband in every way.  The biggest mistake a Christian woman can make is  to stop taking God’s strength and sufficiency to stay  honest with him even if it isn’t welcomed while taking care of the children mostly. Thank God for single women, widows, young and unmarried yet in the church who are praying during all those moments. Western men, more so Christian men could be just as bad as that young man from Iraq, except they have no foolish traditions to back them up. Phew!

I believe that well being of a husband, pastor, leader of any significant ministry is in the hands of the women. Only because he does all the jobs up front and they behind close doors, doesn’t mean they are less powerful. A wife must provide healthy and nutritious meals, kick him out towards the gym, swimming, walking, cycling if need be – any activity is better than work 24/7 or sitting in front of a TV; must intercede for him through constant prayer, remain spiritual, in active relationships with the Lord  herself. In one of the thrillers about an FBI agents work, a wife of one of them  could not handle his job and walked out on him with a baby. She  got tired of criminal cases that devoured his personal life as much. On the other hand, he felt that he was destined to catch those mad men: how could he rest while they are killing the innocent, unsuspected citizens? Even though he remained at his job, he appeared to be a wounded man. I’m sure in real life it is worst drama.

Who is here with all the power, who really needs to be a strong helpmate ready to go and do whatever the Lord has her to do in order to make her husband bulletproof ? The woman. After all, when Eve took an initiative and  offered the forbidden  fruit to Adam, she changed the course of entire humanity. Does that sounds like a suppressed weak creature? From that moment on, the Woman, more so a Christian one, still remained in a place of great influence over men, either for better or for worst.

That’s why the only advise I could of gave to my young, newly married Christian friend from Iraq, is to pray for her husband until God answers her. Pray for herself at the same time.Carry on reading the Bible. ‘I wish I could  stop lashing out when he talks so negatively about me.’ ‘Yes.  The only solutions – self-control. One of the fruits of the Holy Spirit.‘  No one  is out of God’s reach. It is only a matter of time. Even world ruler do exactly as He pleases.

Once, in early days of acquaintance with Susanna,  Spurgeon asked her: ‘Do you pray for your husband somewhere in the world?’ That was his plea as a preacher that people would pray for him as much as they could. No wonder he was titled ‘the Prince of Preachers.’ Today I find his writings still the most inspirational by the Holy Spirit.

But there are  mature, deeply spiritual Christian women as they seem to be, are out there who think they can afford not to intercede for their husbands.  The interest and eagerness to support what he does is lost. And it doesn’t worry them or others. Simply  shocking. Perhaps they got tired to be  sacrificial on the back stage. May be they are not strong or wise enough to confront a deep pain that a husband caused at one point.  I certainly struggle with ‘being sacrificial whenever it needed’ from time to time. I read some of the stories about female missionaries and think to myself: ‘She can’t be human.’ But I also know  that anybody could be weak and apathetic. It takes effort and will to remain spiritual. Let’s be encouraged, not forfeiting God entrusted  power to create better households with husbands who are imitators of  Christ – how powerful that is….

Nutrition for the body and soul.

A Mum to five lively children, a follower of Christ, passionate about God, His truth and writing.

A boy, his books, and a blog

Describing the beauty of nature

What the Hell is going on

Turn and print all your digital contents, blogs and social networks into amazing real paper books on blookup.com

Looking for the signs of Jesus' return

for people who would try anything except whitewater rafting (probably)

praying, writing, and running - for her life

"Jesus answered, ‘I am the way and the truth and the life. No one comes to the Father except through me" (John 14:6)

Rejoice always, pray constantly, give thanks in all circumstances; for this is the will of God in Christ Jesus for you. 1 Thessalonians 5.16-18

Everything Rides on Hope Now
Predictable in Her Unpredictability

Doing What Makes My Soul Shine

Finding God in the Ordinary

An expat mum exploring, crafting & cooking in Tbilisi with a toddler in tow...

Timeless truth in a changing world

Of Memory and Identity

The purpose of Samuel at Gilgal is to spread the gospel of Jesus Christ and encourage Christian discipleship.

a linguistic representation of an autism

You Can't Direct the Wind, But You Can Adjust Your Sails

“If you want to be a writer, you must do two things above all others: read a lot and write a lot.”

We Teach People to Live A Real Natural Life.

Looks good from my end; how about yours?

All things health, psychology and happiness to get more out of life!

Living a Life of Grace

our story, our adventure

living life internationally, learning from those around us...

i want to see more stuff shaped like a cross

THE CUP OF SALVATION